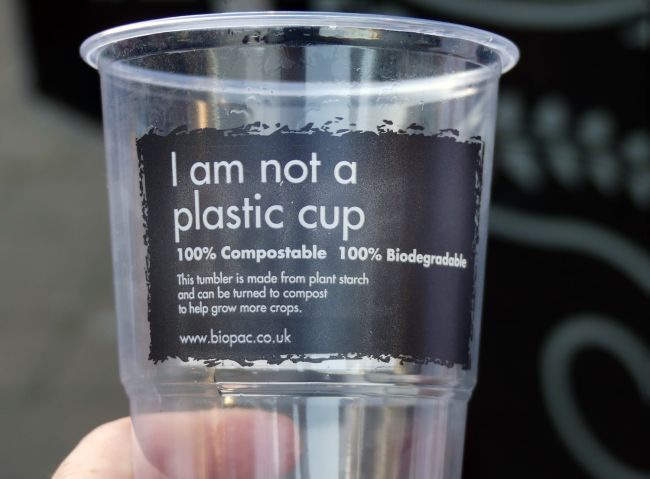 Much has been written about the problems associated with packaging beer in those flimsy plastic film six-pack rings or rigid snap-on can carriers, neither of which are curbside recyclable. As for the other plastic culprit in craft beer – festival and beer garden cups – that presents another problem, and one that’s not as easily solved or avoided.

Practically every brewery that serves beer for outdoor consumption or pours samples at a festival in disposable cups is contributing to the mountain of single-use waste that’s piling up every year. And unfortunately those compostable* cups, typically made from corn starch, that beer pourers or festival volunteers brag about are only helpful if they get collected separately from garbage or recycling and sent to a commercial composting facility. Very few venues appear to be doing that.

If put into recycling bins, which they almost always are, they actually contaminate the recycling process. If they end up in a landfill, it could take 100 years or more before they eventually break down, if at all. Compostable* cups may seem like an easy solution, but the devil is always in the details. And it highlights the unintended consequences that occur when the all-important concepts of REDUCE and Reuse are ignored in favor of jumping straight to recycle or compost. The former are a viable solution to our over consumption of single-use items while the latter is simply not sustainable.

Confusion over the difference between recyclable, compostable, photodegradable or biodegradable only adds to the problem, and the absence of separate streams and proper signage for disposing of various products at beer gardens and festivals isn’t helping. That’s probably because the infrastructure for sorting and processing such innovative compostable* products just isn’t there yet. And judging from the lack of recycling capacity in much of the world, it’s not likely to improve any time soon. Ultimately, the best destination for most compostable* bioplastics at this point is in the trash.

As reported by the LiveScience website, what exactly happens to compostable materials when they end up in landfills is up for debate. Commonly used compostable* material such as those corn starch PLA (which stands for polylactic acid) cups sometimes break down anaerobically to release methane, a greenhouse gas about 30 times more potent than carbon dioxide. Another study found that PLA sometimes doesn’t break down at all in a landfill, meaning that cups, straws, and other items marketed as compostable* wind up in the trash but don’t actually compost there either.

“In theory, Peter Canepa, a life cycle assessment specialist with the Department of Environmental Quality in Oregon told LiveScience, “these materials should [be collected separately and go to] a commercial composting facility, but the majority of dedicated composting facilities in the U.S. only accept yard trimmings and similar organic refuse.” Reason being that compostable* bioplastic items, which are chemically modified, often don’t result in the kind of nutrient-rich soils desired for gardening or farming. Commercial composters in at least one state have actually published a report on why they don’t want compostable* packaging and serviceware ending up in their facilities at all.

Admittedly, it’s a conundrum for those breweries, festivals, and outdoor events trying to do right by the environment, especially when sustainable solutions such as using proper glassware or allowing patrons to bring their own refillable cups can be more costly and less convenient. One alternative, the new Ball Aluminum Cup, promises to be a better option because it’s infinitely recyclable, though not yet practical for most small businesses because it’s currently more expensive than plastic. The cups are far more durable than plastic, however, and therefore could be washed and reused multiple times to make the economics more favorable, which is likely to happen anyway as production scales up and the price comes down.

Ultimately, environmentally conscious consumers will need to voice their opinions by putting their money where their beer-drinking mouths are. Fortunately research indicates that many beer purchasers (and not just craft drinkers) are willing to pay a little more for sustainably produced, packaged, and served beer. The next step is to prioritize the environment ahead of convenience when choosing where to indulge. That means voting for eco-friendly businesses with their wallets, and responding to business-as-usual establishments with their feet – by deciding to go elsewhere.

*The term compostable appears with an asterisk throughout this blog post because of the disingenuous marketing that often accompanies it, especially as it relates to bioplastics. It’s an unfortunate development that environmentalists refer to as greenwashing. Long story short, as this report makes clear, the vast majority of bioplastic cups, cutlery, take-away containers, etc., will degrade in the environment, land or sea, just like traditional plastic. In other words, they only degrade into smaller particles called micro plastics which frequently leak into the environment and pollute our oceans, soil, and air quality. They aren’t truly organic material and therefore aren’t truly compostable.