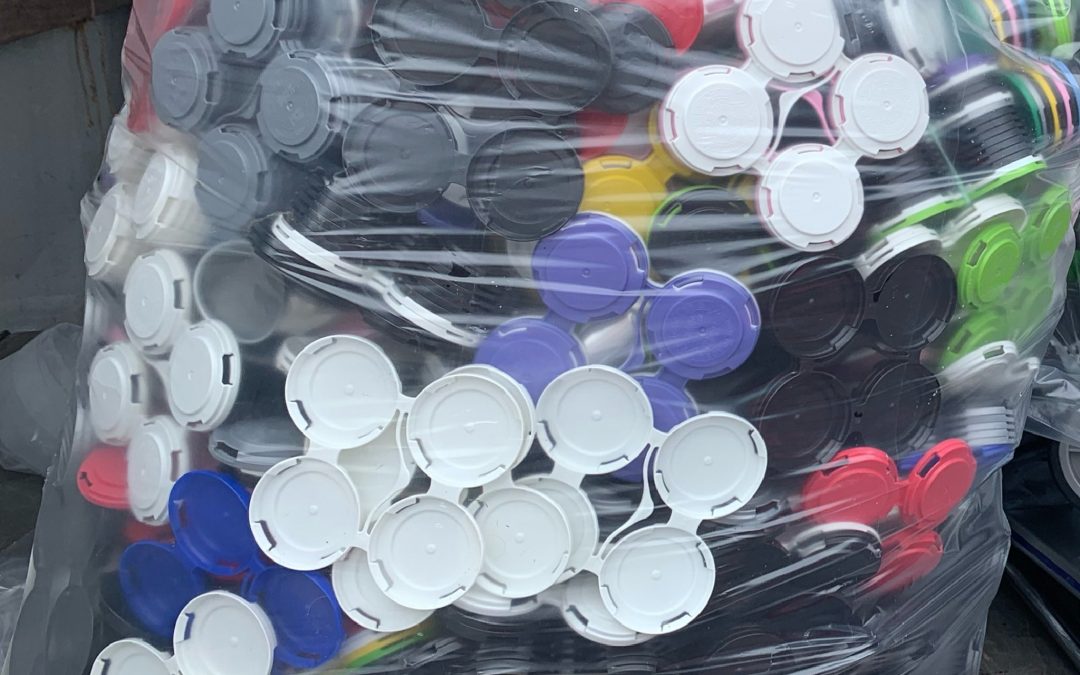 PR / Metro Boston (July, 2021) — An initiative aimed at decreasing the millions of plastic can carriers that end up going to landfill or incineration each year in Massachusetts reached its first milestone last week with the successful completion of a Metro Boston pilot program. Since launching in early May at Lamplighter Brewing in Cambridge, Aeronaut Brewing in Somerville, Harpoon Brewery’s harbor side beer hall, and Trillium Brewing’s two Boston locations, environmentally conscious consumers have turned in nearly 20,000 of the not-curbside-recyclable carriers for reuse and proper recycling.

During the 8-week pilot some 8,000 carriers were donated to smaller Boston area breweries such as Portico Brewing, Bone Up Brewing, Remnant Brewing and others for reuse in packaging their beer. The remaining 335 pounds of HDPE #2 plastic carriers have been hauled away by the program’s sponsor, GreenLabs Recycling, which will deliver it to a local plastics processor to be shredded, melted and then pelletized into raw material for new plastic products. The first-of-its-kind collection and delivery model is now set to begin a steady pickup schedule at the aforementioned participating breweries.

As reported in a previous release, the amount of plastic beer packaging waste ending up in landfills each year is enough to fill up any of the state’s largest breweries with discarded carriers rather than beer. Prior to the awareness campaign launched by Eco-Friendly Beer and the Mass. Brew Bros., just 10% were being collected and reused, and less than 2% recycled. Backed by the Massachusetts Brewers Guild as well as environmental groups like RecyclingWorks, RecycleSmart, Mass Recycle and others, the tide appears to be shifting.

It’s not just Metro Boston that has seen a surge in collections. Statewide, a notable uptick has occurred in consumer turn-ins of used carriers at practically any brewery or beer store willing to accept them. Inspired by success stories such as Stone Cow Brewing in Barre, which has packaged some 200,000 cans in sanitized and re-used carriers since initiating its reuse operation, or Scituate’s Untold Brewing, which has reused more carriers than any brewery in the state during the last year, many in the industry are realizing the benefits of such efforts. As a result, numerous breweries have revamped their collections efforts while dozens more have joined the movement. Both Navigation Brewing in Lowell and Bone Up Brewing in Everett have met with such success that they no longer need to buy new carriers and are instead pocketing the savings in packaging cost.

The number of verified can carrier collections programs now stands at nearly 100, and the Mass. Brew Bros. website has even created a state-wide map so consumers can find their nearest location. Not only are breweries benefitting from their own collections programs, but those willing to reuse have access to hundreds of additional carriers from larger breweries like Exhibit ‘A’ in Framingham and True North Ales in Ipswich. High volume production makes is impractical for such breweries to reuse carriers, but hasn’t stopped them from demonstrating corporate social responsibility (CSR) by collecting and then donating or properly recycling them.

Craft beverage producers in other industries have also taken notice. Artifact Cider Project is planning to initiate collections programs at both its Northampton production facility and its Cambridge taproom. Additionally, cannabis dispensary Theory Wellness, which packages its popular THC-infused Hi5 seltzer in plastic can carriers, will soon announce the launch of a take-back program at all three of its Massachusetts locations, with the potential to expand it to some 30 more dispensaries that it distributes to across the state.

Further potential exists for increasing collections at high-volume retail outlets like larger liquor and grocery stores, and consideration is being given to expanding collection services offered by GreenLabs Recycling beyond just Metro Boston. There are even exploratory discussions under way about starting similar initiatives in neighboring states such as Connecticut, Rhode Island and Vermont. For more information contact Rob at ecofriendlybeerdrinker@gmail.com or serena@greenlabsrecycling.com.

Rob Vandenabeele, an avid gardener, biker, nature lover and beer industry blogger, founded the EcoFriendlyBeer.com website in early 2020. Currently enrolled in the Environmental Studies program at the Harvard Extension School, his goal is to inspire people to better protect our earth, the only planet with craft beer. He offers sustainability consulting for the craft beverage industry. You can contact him at @ecofriendlybeerdrinker@gmail.com or follow him on Facebook, Twitter or Instagram at @EcoFriendlyBeer.