Just One Tenth of Plastic Can Carriers Get Re-Used Or Recycled in Massachusetts: A Team of Eco-Minded Breweries and Environmental Groups Plan to Change That 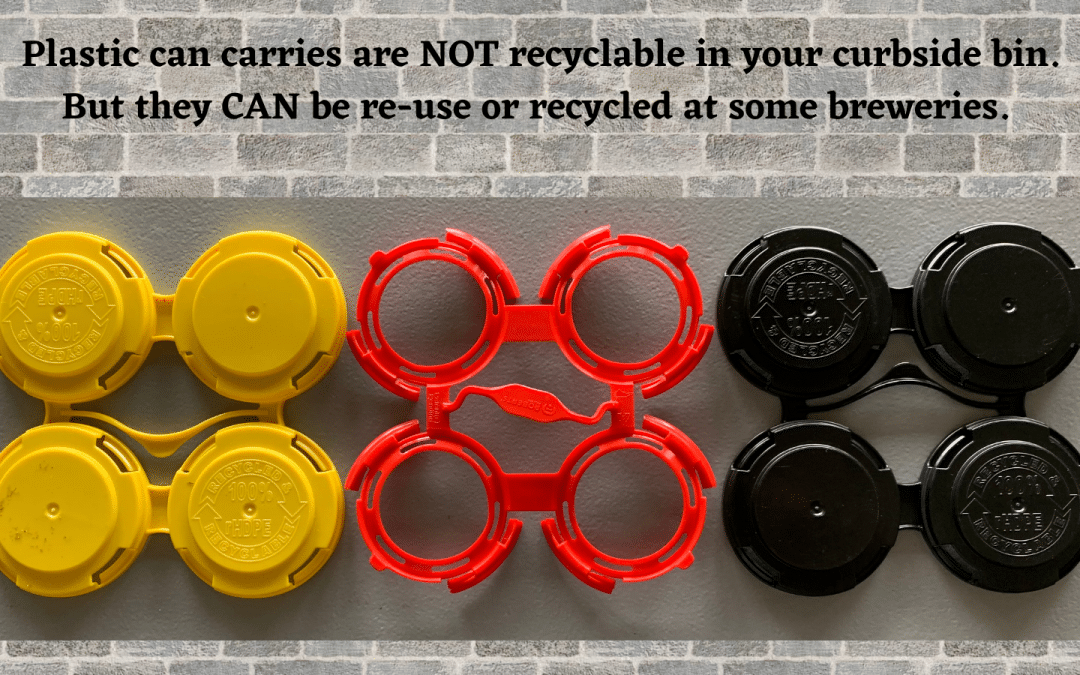 PR / Massachusetts (April, 2021) — It’s estimated* that at least 10 million new plastic can carriers are used annually by breweries in Massachusetts, with just 10% of them being collected and re-used, and less than 2% of them ever getting recycled. As a result, the amount of plastic beer packaging waste ending up in landfills each year is enough to fill any of the state’s largest breweries with discarded carriers rather than beer.

A number of factors have combined to create a perfect storm in which carriers end up in the hands of consumers who pitch them into their curbside recycling bins because manufacturers market them as “100% recyclable.” But the state’s RecycleSmart website, an initiative of the Massachusetts department of Environmental Protection (DEP), and its three largest waste disposal companies (Casella, Republic, and Waste Management) all say that plastic carriers and six-pack rings are incompatible with sorting equipment. As a result, they get rejected and sent to landfill or incineration, both of which have negative impacts on the environment.

The problem can sometimes be exacerbated if brewery owners or taproom employees aren’t aware of the issue either. Even when informed of the fate of plastic can carriers, breweries and their customers have often had no practical way to dispose of them. For a deep dive on the conundrum of trying to recycle plastic can carriers, read noted national beer writer Dave Infante’s recent story for Vine Pair, “The Plastic PakTech Paradox.”

Starting in late April, the founder of EcoFriendlyBeer.com is launching an initiative to raise awareness about the problem, provide a variety of solutions that consumers and breweries can utilize, and significantly increase the state-wide rate of re-use and proper recycling of plastic carriers and rings. The Mass Brewers Guild (MBG) supports the idea, which it believes has the potential to make a real difference while sending a powerful message that the craft brewing industry wants to do business sustainably and do right by the environment. And the Mass. Brew Bros. are taking their support a step further, kicking off a social media campaign to challenge the state’s craft beer drinkers to rescue a million or more beer carriers by the end of 2021.

To help consumers meet the challenge, Eco-Friendly Beer and the Mass. Brew Bros. have partnered with GreenLabs Recycling on an innovative collection and recycling program that will start up in Metro Boston in early May. GreenLabs currently provides the only plastic recycling collection service of its kind for labs in academia and industry, and will soon make it available to four of Greater Boston’s popular breweries: the Harpoon Beer Hall in South Boston, Lamplighter Brewing in Cambridge, Mighty Squirrel Brewing in Waltham, and at Trillium Brewing’s Seaport and Fenway locations. The pilot program will ensure that collected can carriers actually get to a plastics processor, something that’s yet to be done in Massachusetts. Once there, they will go through a grinder and eventually get used as raw material for other plastic products.

In collaboration with RecyclingWorks, an assistance program funded by Mass DEP that helps businesses and institutions reduce waste and maximize recycling, breweries outside of the Metro Boston area will also have a recycling option if they’re willing to consolidate larger quantities and do the hauling themselves. Stockbridge Plastics will accept a full gaylord box (which holds about 12,000 carriers), but it must be delivered to their facility in West Boylston through a prior arrangement.

For consumers looking to properly dispose of those flimsy 6-pack rings, both Dorchester Brewing and Cape Cod Beer are accepting them from consumers. Though less common among craft brands these days, the photodegradable plastic material they’re made from isn’t curbside recyclable either. But they can actually be recycled into new rings if mailed back to the manufacturer through the RingRecycleMe program, which both breweries take part in.

For the can carrier re-use and recycling initiative to have the most impact, breweries and beer stores will need to embrace corporate social responsibility (CSR) and replicate best practices developed by breweries such as Stone Cow in Barre, which began its full-scale re-use program in 2018 and has since packaged some 200,000 cans in sanitized and re-used carriers. Another is Untold Brewing in Scituate, which in 2020 re-used more carriers than any brewery in the state, some 29,000 (resulting in a savings of nearly $3,000 in annual packaging costs).

Cooperation will also need to come from the state’s larger breweries, for which re-use programs may not be practical due to automated application equipment and significantly higher production volume. Exhibit ‘A’ Brewing in Framingham doesn’t re-use, but has collected enough carriers through its take-back program to start offering them to smaller breweries who do. Such donation models could become common practice, especially for breweries with busy taprooms where high collection volumes are possible. Such an effort could significantly increase the percentage of beer currently being packaged with re-used carriers, saving small breweries money in the process.

If collections exceed donation demand, or when carriers are damaged and no longer usable, breweries should then turn to recycling. Greater Good Imperial Brewing in Worcester has an arrangement with its packaging provider to send specified quantities of collected and broken carriers back to the provider’s warehouse. When enough are gathered there, they can eventually be sent off to a recycling processor.

Informal can carrier take-back programs currently exist at more than a third of the state’s 200 breweries, but most only collect enough to package a portion of their beer with them. The most successful programs have actively promoted their efforts through social media and provided specific details to customers on which type or color they can re-use. Beer stores, too, can join the re-use and recycling efforts. Craft Beer Cellar in Belmont, one of the first to allow four and six-packs to be separated for sales of single cans and mix-packs, allows customers to return carriers to its store and has collaborated with breweries like Untold that are willing to re-use them.

When informed, and given the opportunity, many in the craft beer community do the right thing with their used can carriers. More work must be done, however, to raise awareness on how the craft beer community can improve the current re-use and recycling rate of just 10%. Use the map below to see where plastic can carriers can be turned in and given a second life in your area.

For more information regarding proper can carrier and ring recycling, refer to EcoFriendlyBeer.com’s Can Carrier Recycling Fact Sheet. For guidance on starting or improving a re-use or recycling program, reference the Can Carrier Re-Use and Recycling Best Practices document. For any other questions, or for help navigating any of the program logistics contact Rob at ecofriendlybeerdrinker@gmail.com or MassBrewBros@gmail.com.

*Estimates for can carrier use, re-use and recycling were calculated using data collected by the Mass. Brew Bros. through correspondences with Massachusetts breweries, officials from recycling groups, and the state’s largest waste management companies. The 10 million figure doesn’t include beer purchased in Massachusetts from out-of-state breweries. When those figures are included the total number of can carriers entering the waste stream is significantly higher.

Rob Vandenabeele, an avid gardener, biker, nature lover and beer industry blogger, founded the EcoFriendlyBeer.com website in early 2020. Currently enrolled in the Environmental Studies program at the Harvard Extension School, his goal is to inspire people to better protect our earth, the only planet with craft beer. You can follow him on Facebook, Twitter or Instagram at @EcoFriendlyBeer.

An initiative of the Massachusetts Department of Environmental Protection (DEP), RecycleSmartMA provides educational resources for residents, customers, students, tenants, co-workers or mothers-in-law to help get the word out about Smart Recycling. Its Recyclopedia widget allows anyone to search hundreds of common items (from paper bags to pizza boxes) to find out if they belong in the recycling bin or elsewhere.

RecyclingWorks in Massachusetts is a recycling assistance program funded by the Massachusetts Department of Environmental Protection and delivered under contract by the Center for EcoTechnology that helps businesses and institutions reduce waste and maximize recycling, re-use, and food recovery opportunities.