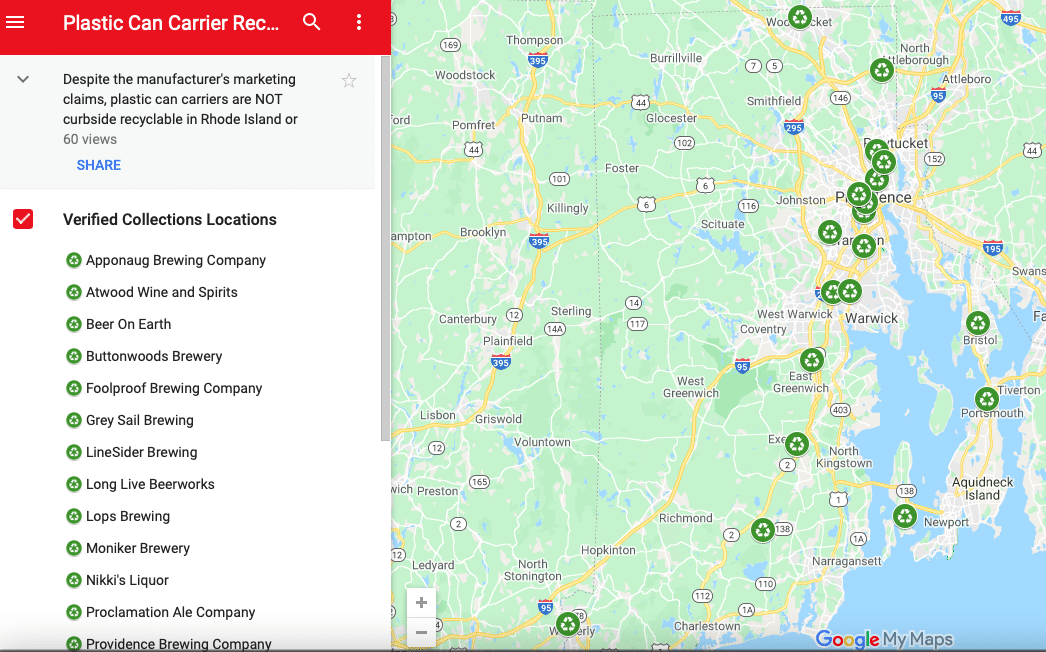 Surprisingly, plastic can carriers don’t belong in your recycling bin, but these environmentally conscious RI businesses are taking them back

PR / Rhode Island (August, 2021) — Millions of plastic can carriers end up in the hands of Rhode Island craft beer drinkers each year, with most being tossed into single-stream recycling bins because manufacturers market them as “100% recyclable.” But according to Rhode Island Resources Recovery Corporation (RIRRC), which handles most of the state’s trash and recycling, rigid plastic carriers – much like those flimsy plastic film 6-pack rings – are incompatible with sorting equipment. As a result, they get rejected and sent to landfill or incineration, both of which have negative impacts on the environment.

The good news is that dozens of Rhode Island breweries, along with some beer and liquor stores, have been taking them back from customers to help keep them out of the waste stream. A new interactive map is hoping to make it even easier by helping environmentally conscious consumers find their nearest drop-off location. Created by EcoFriendlyBeer.com, a website that shares insights on how the beer industry and its consumers can be more mindful of the only planet with craft beer, the map lists verified businesses that will either sanitize and re-use the carriers, or arrange to send them directly to a plastics processor to be shredded, melted, and pelletized into raw material for new plastic products.

The idea behind the effort stems from a successful re-use and recycling initiative that launched a few months ago in Massachusetts and resulted in an additional 20,000 plastic carriers being diverted from landfills or incinerators in the first 8 weeks. A major factor behind the accomplishment was that it brought together recycling and environmental groups, along with the Massachusetts Brewers Guild, to launch a formal awareness campaign and provide a variety of ways to increase the rate of re-use and proper recycling.

Nearly three quarters of the Rhode Island breweries that package beer with rigid plastic can carriers have a take-back program, Apponaug Brewing in Warwick being the latest to join the ranks, but a number of the state’s largest beer producers still don’t. And only a handful of the hundreds of liquor stores that sell craft beer currently offer such an option for customers. Nikki’s Liquors in Providence initially signed up for a recycling program with the product’s manufacturer, but a member of the store’s team explained that while you get a free bin to collect them in, you have to find a place to recycle them yourself. Through a collaboration with the founder of EcoFriendlyBeer.com, it hopes to start saving and donating them to nearby breweries like Moniker Brewing and Beer on Earth who can clean and re-use them.

That’s what Mike Duclos, manager of Atwood Wine & Spirits in Cranston, has been doing. He’s forged a partnership with neighboring Buttonwoods Brewing, which periodically receives his full bins of used carriers. By cleaning and re-purposing them, the brewery saves hundreds of dollars in annual packaging cost. At another small brewery, Linesider Brewing in East Greenwich, co-owner Jeremy Ruff is also saving money. His brewery was recently able to complete a full canning run exclusively with recycled carriers turned in by its customers.

Others, like Long Live Beerworks, Proclamation Ale Company, or Tilted Barn Brewing, don’t re-use (primarily due to their high production volume) but it hasn’t stopped them from offering take-back programs. An arrangement with their packaging provider allows them to send large quantities back to the company’s warehouse and later be sent to a plastics processor for proper recycling. Further potential exists for adding collections programs at some of the state’s largest producing breweries, as well as in more beer retail outlets. Additionally, the Rhode Island Brewers Guild is exploring an option to add a can carrier recycling icon for participating breweries on its mobile brewery passport app. Combined, the actions have the potential to significantly reduce the amount of new plastic packaging needed by helping breweries re-use as many carriers as possible while ensuring that excess or damaged carriers actually get recycled.