Sustainably Brewed Beer Can Cost A Little More, But Most Consumers Will Pay For It 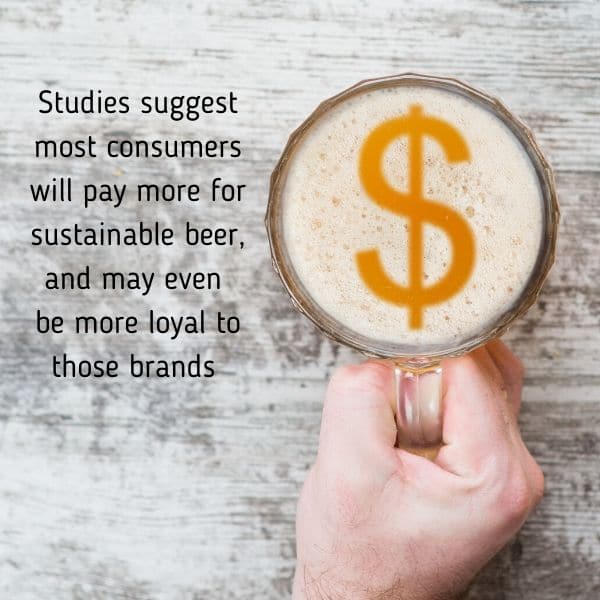 A number of studies suggest that consumers are willing to pay more for sustainable products. One of the most recent, a 2019 survey by Computer Generated Solutions (CGS), found that two thirds of consumers said it was a major consideration, and that they’d be more likely to purchase from and stay loyal to brands with sustainable options. Other research has even focussed on particular products, including beer. One, published in 2018 and entitled “Willingness to pay for sustainable beer, revealed that 59 percent of its respondents would pay more for their beer if the brewery producing it used sustainable practices. Among its discoveries were that “consumers who already pay a premium for craft beer are more aware of their purchasing behavior and the manner in which their consumption patterns may affect the environment.”

“The takeaway for the brewing industry is that it’s financially feasible to introduce energy-saving practices into the brewing process,” the study’s co-author Sanya Carley told Science Daily in an interview. The chief economist of the U.S. Brewers Association, Bart Watson, agrees. He told National Public Radio’s The Salt that the findings were what he would expect based on recent trends in the beer market, adding that “an increased number of people are willing to pay more to companies that share their values.” Another recent beer study backs that up, indicating that craft beer drinkers are willing to pay a premium for sustainably produced and/or packaged beer, up to $2 more per six-pack, in fact.

Considering such research, potential exists for breweries to achieve a high degree of brand affinity by aligning with eco-friendly business practices, especially if they convey contextual marketing messages affiliated with environmental causes. Examples include Florida’s Salt Water Brewery and its switch from plastic to compostable can carriers that are safer for marine life, or Canadian organic beer maker Beau’s All Natural Brewing which relies exclusively on renewable energy to power its brewery. A report by Accenture Strategy, The Rise of the Purpose-Led Brand, contends that “a brand’s purpose must be as unique as the brand itself,” and that it should be “aligned to the values of the customers it hopes to engage.” It concludes that “certain dimensions of purpose outshine others, such as culture, transparency and ethical values.”

A number of companies, including breweries, are likely to be under-estimating the financial benefits of environmental social-cause marketing efforts. Of course, not all consumers are as concerned about ethical practices and sustainable brewing or packaging methods as others. And investments in things like ethically or locally sourced ingredients, energy saving technologies, or eco-friendlier packaging, like much of the brewing business, can up-front capital intensive. While likely to pay off over time, it’s incumbent upon breweries to target the right kinds of consumers, largely Gen Z and Millennials, who are seeking environmentally conscious green brands and want to engage with them.

Related: What 3 Small Breweries Are Doing to Make A Big Environmental Difference