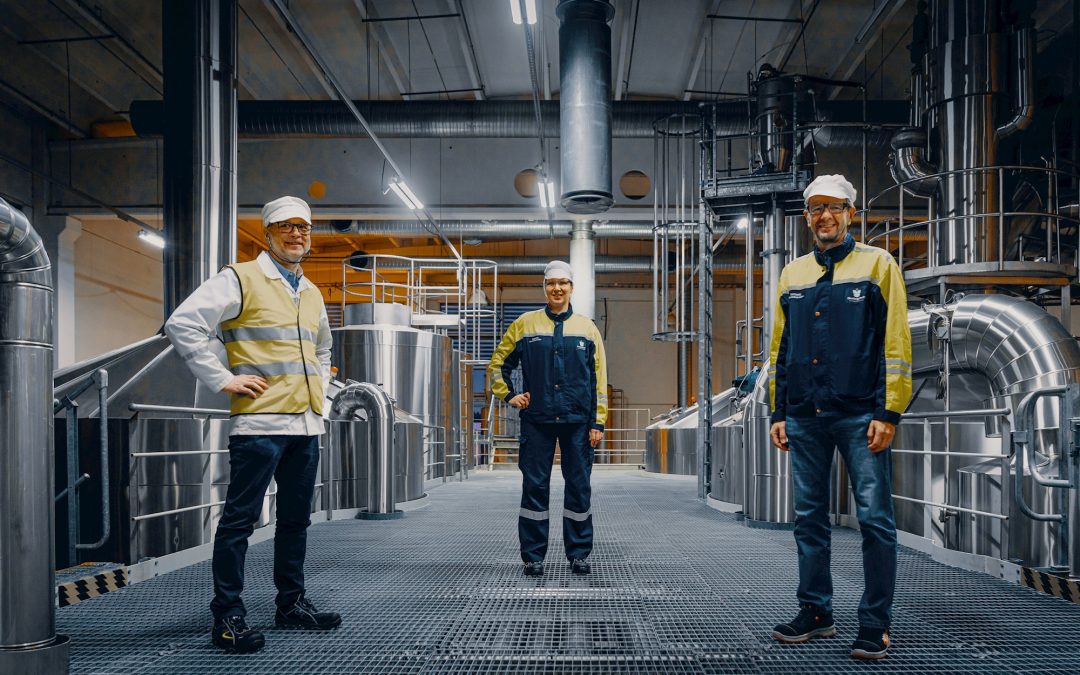 PR / Finland (December 2020) — The oldest brewery in the Nordic countries, Sinebrychoff, will make its beverages with 100% renewable energy from 1 January 2021. This will become possible as Sinebrychoff’s partner Keravan Energia fully abandons the use of peat. Also heat recovery at Sinebrychoff plays an important role. Work to limit global warming will continue, as the goal is to make the brewery fully carbon neutral.

Keravan Energia has decided to abandon the use of peat by the end of this year. In addition, Sinebrychoff has agreed with Keravan Energia that the production of thermal energy for Sinebrychoff’s beverages (such as Karhu, KOFF, KOFF Long Drink, Crowmoor, Somersby, Battery Energy Drink, Coca-Cola beverages and waters) will no longer use fossil fuels, but only biomass based fuels from sustainability certified forests (PEFC, FSC). Those are mainly forest residue chips and about a quarter of by-products (sawdust, bark) from sawmills, for example. Keravan Energia procures biomass mainly from domestic suppliers. The fuel is 80% domestic, the rest comes from the Baltics and Russia. As the Keravan Energia power plant is part of the support scheme for electricity production from biomass, the fuels are audited annually.

“At Sinebrychoff, we are fully committed to combating climate change and achieving our Science Based Targets, to limit global warming to 1.5° C. As part of our sustainability program – Together Towards Zero – we are switching to fully renewable heat energy at the beginning of next year, achieving our goal of CO2 neutral brewing 9 years ahead of schedule, ”says Marja-Liisa Weckström, Director of Communications and Sustainability at Sinebrychoff.

Sinebrychoff has been using green electricity since 2015. The transition to renewable thermal energy will continue the brewery’s determined work towards carbon neutrality. Very few climate emissions remain, such as emissions from refrigeration leakage. Those will be offset, and Sinebrychoff is currently mapping out best practices for that. The goal is for Sinebrychoff’s brewery to be carbon neutral during the spring of 2021, reaching the Carlsberg Group’s target 9 years ahead of the 2030 target.

As part of the district heating network, climate action, clean energy and co-operation and partnership with Keravan Energia are emphasized in the spirit of the UN Sustainable Development Goals 7, 13 and 17. With Keravan Energia abandoning the use of peat, Sinebrychoff will achieve its targets of 100% renewable energy use, and will not need to invest in its own biopower plant.

Sinebrychoff uses a total of 30 GWh (gigawatt hours) of 165-degree hot water per year from Keravan Energia as thermal energy. The brewery achieved its energy efficiency agreement for the period 2017–2025 well in advance already in 2018.

“However, we have continued to take efficiency measures for both heat and electricity. Significant savings have been achieved, in particular by improving the efficiency of heat recovery by means of heat pumps. In 2019, we recovered 9,300 MWh of heat, which corresponds to the annual thermal energy needs of 450 detached houses and covers 23% of the heat demand of our entire production plant. We are currently enhancing heat recovery from wastewater by replacing heat exchangers. The more efficient we are in recovery, the more opportunities we have to recycle heat through Keravan Energia to everyone in its district heating network, ”says Pasi Lehtinen, Sinebrychoff’s Vice-President of Production and Supply Chain.

Keravan Energia also produces district heat in its biopower plant to heat almost the entire municipalities Kerava and Sipoo. By abandoning peat, the power plant’s CO2 emissions will fall by 45,000 tons annually, which will have a major impact on the carbon footprint of residents and companies in the area.

“Abandoning peat is one of our concrete actions towards the use of completely renewable fuels. We have already reduced our CO2 emissions by 88 percent from 2010 levels. However, we would not be able to make these important investments alone. Genuine and long-term cooperation with our customers, such as Sinebrychoff, enables us to make sustainable and significant investments for the benefit of the environment,” says Jussi Lehto, CEO of Keravan Energia.

The transition to renewable energy is another big step in the joint journey of Sinebrychoff and Keravan Energia: Already after the brewery moved to Kerava in 1992, a collaboration began in which the process heat generated by Keravan Energia circulated slightly warmed to heat homes in Kerava after being used at the brewery. The symbiosis of industry and the power plant was the starting point for cooperation, which has now also developed into a climate cooperation.

About Carlsberg Group sustainability program, Together Towards ZERO

Together Towards ZERO is the Carlsberg Group’s vision for a better tomorrow at a time of serious challenges such as climate change, water scarcity and public health concerns. It consists of four ambitions: ZERO carbon footprint, ZERO water waste, ZERO irresponsible drinking and a ZERO accidents culture. Each of these is underpinned by individual measurable targets leading to 2022 and 2030. This includes targets to half water use at its breweries globally by 2030, and to develop partnerships to protect shared water resources.