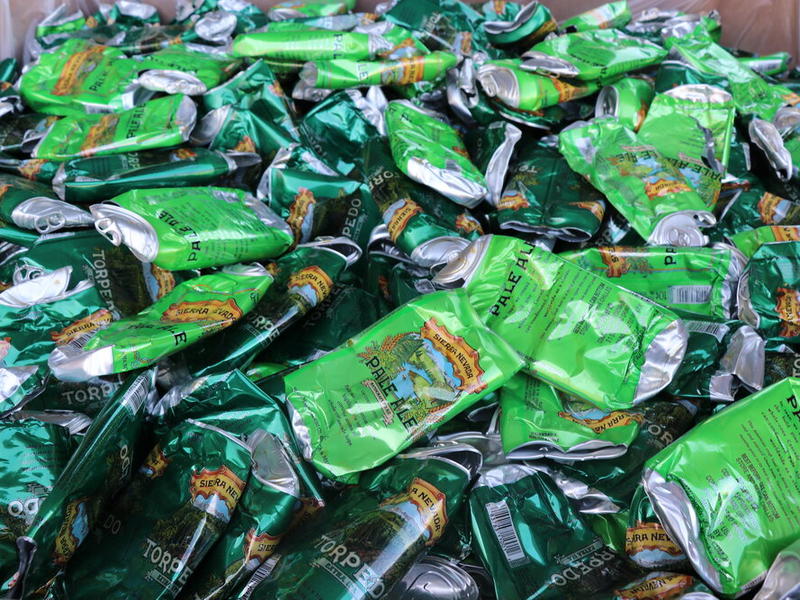 PR / Mills River, NC (February, 2021) —Sierra Nevada Brewing Co. and American Recycling of Western North Carolina (WNC) announced today the formation of the Western North Carolina Brewery Recycling Cooperative and the upcoming opening of a new recycling drop-off site near Asheville. The cooperative and the new drop-off site, which is set to open in the coming months, will create infrastructure for the area’s 80+ breweries to recycle common industry wastes currently going to landfill.

“The cooperative is an effort to pool resources and leverage our shared economy of size to make a real difference in the community,” said Leah Cooper, Sustainability Program Manager at Sierra Nevada.

The new recycling co-op will be available to breweries and small businesses across Western North Carolina, greatly increasing the area’s ability to recycle commercial materials.

“This is a win-win for both the local breweries and American Recycling,” said Ron Moore, owner of American Recycling of WNC. “We want to thank Sierra Nevada and all of the others that have helped to make this possible.”

“Many craft breweries use traditional recycling methods where all recyclables are collected together,” explained Cooper. “Because of this, they can’t recycle common industry waste like malt bags, shrink wrap, and PET strapping.”

To combat this, Sierra Nevada started allowing local breweries to drop off recyclable materials at its Mills River facility, which has the volume and infrastructure needed to recycle common industry waste. But it soon became overwhelmed by the demand and realized the opportunity for a cooperative in the community.

While recycling cooperatives aren’t new, WNC Brewery Recycling Cooperative is unique in its breadth and impact.

“We’ve taken into account the 80+ breweries in our region,” said Cooper. “And while the cooperative was created with breweries in mind, it will also be open to any business with similar materials interested in participating.”

Sierra Nevada was the first company to achieve TRUE Platinum Zero Waste certification in 2013 at its  Chico, CA brewery, with its Mills River brewery—the only LEED Platinum production brewery in the country—following suit in 2016. As it looks to the future, Sierra Nevada aims to reach beyond its own walls with similar initiatives that support community and regional environmental and social resiliency.

About Sierra Nevada:
Inspired by frequent trips to the Sierra Nevada mountain range, Ken Grossman founded Sierra Nevada Brewing Co. in 1980. Highly regarded for using only the finest quality ingredients, Sierra Nevada has set the standard for craft brewers worldwide with innovations in the brewhouse and in its sustainability efforts. The pioneering spirit that launched Sierra Nevada now spans both coasts with breweries in Chico, California and Mills River, North Carolina. Sierra Nevada is famous for its extensive line of beers including Pale Ale, Hazy Little Thing®, Torpedo® and a host of seasonal, specialty and limited release beers. Learn more at www.sierranevada.com.

About American Recycling of WNC:
American Recycling is one of the largest independently owned collectors, processors, and marketers of recovered paper and plastics in the Carolinas. Locally owned and operated by Ron Moore, an industry veteran with over 30 years of experience in every facet of the Recovered Material Business, American Recycling maintains a family-oriented approach to business in all interactions with its associates and customers. American Recycling offers services to all types of recovered material generators and provides flexible, customized programs that help our clients increase efficiency reduce waste and optimize their environmental stewardship. We work with commercial printers, breweries, municipalities, manufacturing and distribution facilities, commercial shredding companies and paper converters and merchants. We partner with leading mill consumers who remanufacture our recovered material into all types of consumer products.