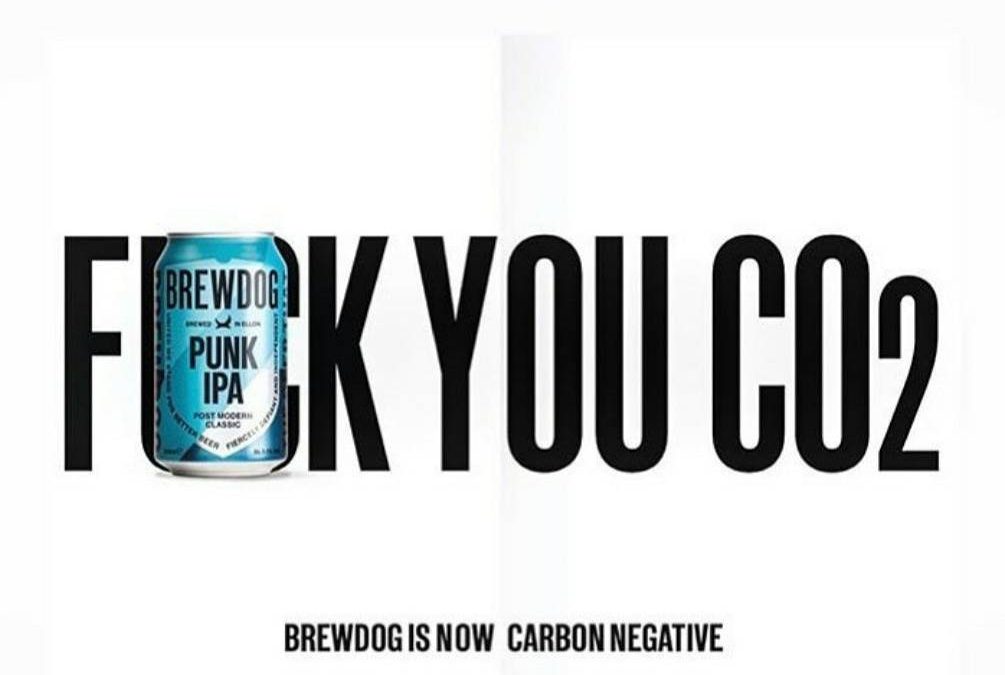 PR / Scotland (August, 2020) – Scottish craft brewer BrewDog has announced that it has taken the unprecedented step to become carbon negative, and that it will remove twice as much carbon from the air than it emits every single year. Making it the first carbon negative international beer brand in the world, as it sets out to fight climate change and have a positive impact on the planet.

The move is founded in its belief that carbon neutral is no longer enough, and that businesses should be having a positive impact on the planet. To this end, BrewDog is unveiling a climate action program with AUD $55m (£30m) of green investments across its business.

As part of these efforts, it has also purchased 2,050 acres of Scottish Highlands just north of Loch Lomond, to create the BrewDog Forest, and plans to plant one million trees over the next few years. Meanwhile, BrewDog Australia is introducing a host of green infrastructure projects and sustainability initiatives, including the introduction of solar-panels, a partnership Carbon Neutral’s Yarra Yarra Biodiversity Project to offset all excess CO2 emissions, and the creation of a sustainable drive thru.

The news comes as BrewDog Australia launches its first Brisbane-brewed headliner beers – now available nationwide on the new e-commerce site at www.brewdog.com/au or at BrewDog’s Aussie home, the DogTap, in Murarrie.

Over the past few months BrewDog has been working closely with lead scientific advisor Professor Mike Berners-Lee and his team at Small World Consulting. Berners-Lee is one of the world’s leading experts in carbon foot-printing and sustainability and has led the process of calculating BrewDog’s carbon footprint and been pivotal in the design of its carbon removal plan. The partnership has helped to direct over AUD $55m (£30m) of investment into green infrastructure to support the business in reducing carbon emissions.

In order to double remove all of its carbon, until it is able to begin planting the BrewDog Forest, the brewer will be working with offset partners on a series of projects. Each organisation has the highest standard of accreditation and has been additionally vetted by Berners-Lee and his team with each project deemed beneficial to biodiversity and local communities.

“Our Carbon. Our Problem. So, we are going to fix it ourselves. Huge change is needed right now, and we want to be a catalyst for that change in our industry and beyond. We fully acknowledge that we are a long way from perfect. However, we are determined to rapidly and fundamentally change everything as we work hard to ensure we have a positive impact on the planet.”

“After decades of inaction we have a full-on climate crisis on our hands. The scale and speed of the change we now need is enormous, and cuts right across politics, business and every corner of society. The good news is that if we are smart about our transition, we can make our lives better at the same time as making them more sustainable. With the actions laid out in this report, BrewDog is giving some of the leadership the world so badly needs. They are raising the bar for the business world, both in their strong carbon cutting action and their straight talking. BrewDog beer can represent another small nudge for a better world.”

BrewDog Australia will soon be adding solar-panels to supply a significant amount of the energy demand from the brewery, taproom and restaurant and is providing all spent grain to feed local cattle in Queensland. Excess CO2 emissions are offset through Carbon Neutral’s Yarra Yarra Biodiversity Corridor, a multi-species native reforestation project located in Southwest Australia which is a global biodiversity hotspot. This Australian Native Reforestation Gold Standard certified project aims to remove existing carbon and improve the environment by planting native species of trees and shrubs to recreate a healthy, functioning landscape, restored after decades of habitat loss and degradation.

BrewDog Australia is also looking to work with green partners, all of which have the highest standard of accreditation, and has plans to launch a sustainable drive thru that will act as beer collection points, hubs for electronic vehicle deliveries and hubs for closed loop, zero waste packaging such as growlers, mini-kegs and returnable bottles. Further details on this will be announced in due course.

A spokesperson for Carbon Neutral said:

“Carbon Neutral is delighted to be working with BrewDog as part of its carbon offset strategy. BrewDog has done more than address our very real climate crisis; it has also acknowledged the need to halt biodiversity loss by funding native reforestation in the Outback of Australia. BrewDog’s approach shows a true awareness of our impact on the planet – by reducing its GHG emissions and supporting the Yarra Yarra Biodiversity Corridor, BrewDog is helping to bring life back to barren landscape.”

One of BrewDog’s primary reasons for investing in local brewing and opening a site in Brisbane is to significantly reduce the miles the beer travelled to reach the consumer. Having unveiled its state-of-the-art Australian Brewery and Taproom in Queensland’s capital city late last year, BrewDog can now offer fans across the country the opportunity to enjoy freshly-brewed BrewDog beer – dispatched the next working day.

Since opening in Brisbane last November, BrewDog has been working hard to establish strong Aussie roots – pouring the best craft beer from across the Sunshine State including Range Brewing, Black Hops, Brouhaha, Aether and Sea Legs at the taproom and restaurant. Having debuted its first Australian exclusive 3.5% Easy Pale Ale back in January, the team is keen to create more small batch brews and show their commitment to supporting other Queensland businesses and collaborating with local distilleries like Beenleigh Rum to create exclusive Queensland-made products.

BrewDog’s expansion into Australia has been supported by the Queensland Government through the Advance Queensland Industry Attraction Fund and Brisbane City Council through Brisbane Economic Development Agency. The brewery is creating a breadth of new jobs for Queensland’s craft brewing industry, with a team of 50 and around a dozen more jobs expected before the end of the year, helping to boost economic growth in Brisbane. The team are also committed to making the business as environmentally sustainable as possible to help support Queensland’s unique environment.

Brisbane Lord Mayor Adrian Schrinner encouraged residents to get behind local producers, such as BrewDog.

“It is also great to see BrewDog beer being produced right here in our backyard for local and national distribution. This type of job-creating investment in key sectors such as food and beverage will help drive our city’s recovery and future growth as we climb out of the economic hole created by the global pandemic. It’s our civic duty; if we’re going to crack a brew on the weekend, make it local first.”

BrewDog will create 1,400 of broadleaf native woodlands, and 650 acres of peatland restoration in accordance with the Woodland Carbon code the Peatland code. As well as sequesting carbon woodland creation also promotes bio- diversity, natural flood attenuation and drives rural economic development. Work is expected to start on the BrewDog Forest in early 2021.

The brewer also plans to create a sustainable campsite on the land, that will host sustainability retreats and workshops for the general public, in addition to inviting its 130,000 Equity Punks investors to help with tree planting from early 2021.

James Watt, BrewDog CEO: “The scientific consensus is clear: we are sleepwalking off the edge of a cliff. Unless the world confronts the urgent carbon problem, science tells us that the results will be catastrophic. There has been too much bullshit for too long. Governments have proved completely inept in the face of this crisis. The change our world and society needs, has to come from progressive business and we want to play our role and nail our colours to the mast.”