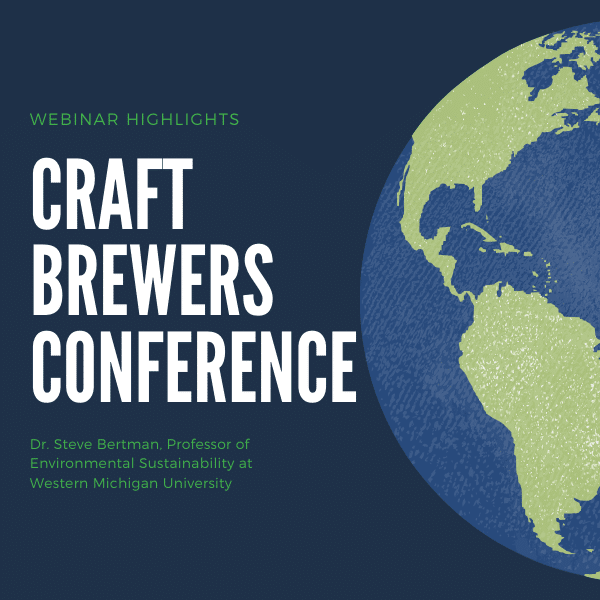 Sometimes a problem is so expansive or daunting that it’s best to put it in practical terms people can easily relate to. So here it is beer drinkers: if the current rate of climate change isn’t significantly slowed in the very near future, some of the ingredients in your favorite brews may soon be in such short supply that flagship recipes will have to change. Not as a result of consumer preferences, but because the conditions under which the barley and hops in those beers are grown will be dramatically different.

“Changing weather patterns, unpredictable agricultural schedules, severe storms, increased droughts, and the spread of pests and diseases are just a few of the ways that climate change presents a threat to the way all businesses will run in the future,” Dr. Steve Bertman explained at a Craft Brewers Conference webinar on May 5th. “The brewing industry is no exception.”

According to NASA, climate change describes a change in the average conditions — such as temperature and rainfall — in a region over a long period of time. Their scientists have observed Earth’s surface is warming, and many of the warmest years on record have happened in the past 20 years. That’s particularly relevant to craft brewers because “the Pacific Northwest (Yakima Valley and Washington State in particular), where 95% of all hops are grown in the U.S., is right in the cross hairs and will experience more climate change than most areas,” says Bertman.

He also points out that climate in the region of the U.S. where barley is grown (75% of the U.S. supply comes from just four states: N. Dakota, Montana, Wyoming, and Idaho) and other parts of the world will become warmer and less predictable in the future. As a result both barley yields and protein content will decrease from resulting drought, escalating heat, and more severe weather. As that happens, brewers will need to experiment with selected breeding of hops and grains and perhaps to innovate with different feedstocks (ingredients) all together. The familiar flavor profiles of some flagship beers will be the most likely to undergo noticeable change, and consumers will need to adjust to evolving and different tastes in many styles.

Because brewing is so energy intensive and climate change is triggered by CO2, 80% of which results from the use of fossil fuels (the other 20% from deforestation), the most important thing brewers can do is switch to renewable energy says Bertman. And that’s easier and less expensive than ever, he claims. “Wind energy is now even cheaper than coal.” He urges the Brewers Association (BA) to use its collective power to push for energy and other resource-saving sustainability initiatives within the industry.

When asked what brewers can do now to address the concerns of climate change, Bertman suggests that any brewery serious about decreasing its carbon footprint should gather data to measure its use of energy. “The largest part of the carbon footprint of a brewery is the brewing itself, so start there,” he advises. The most accurate data will also include energy used on the brewery’s behalf, such as delivery vehicles used by distribution partners or employees who commute to and from work. From there, he says, work on cutting back as much fossil fuel use as possible.

Additionally, using local suppliers who practice regenerative farming practices would be another area of focus. The use of nitrogen fertilizer produces another green house gas, N20, which is 286 times more potent than C02. As for carbon capture technologies, “the jury is still out,” says Bertman. “It’s arguably just a way of justifying the burning of fossil fuels, when investing in renewable energy has by far the most profound impact.”

Of course if global citizens and their governments don’t decrease their reliance on fossil fuels as a whole, then avoiding the aforementioned challenges in the brewing industry is unlikely. In that case, suggests Bertman, “we should make friends with Canada, which is less likely to be affected by severe climate change in the near term, and therefore will become ever more important to the barley and hops supply chain.”