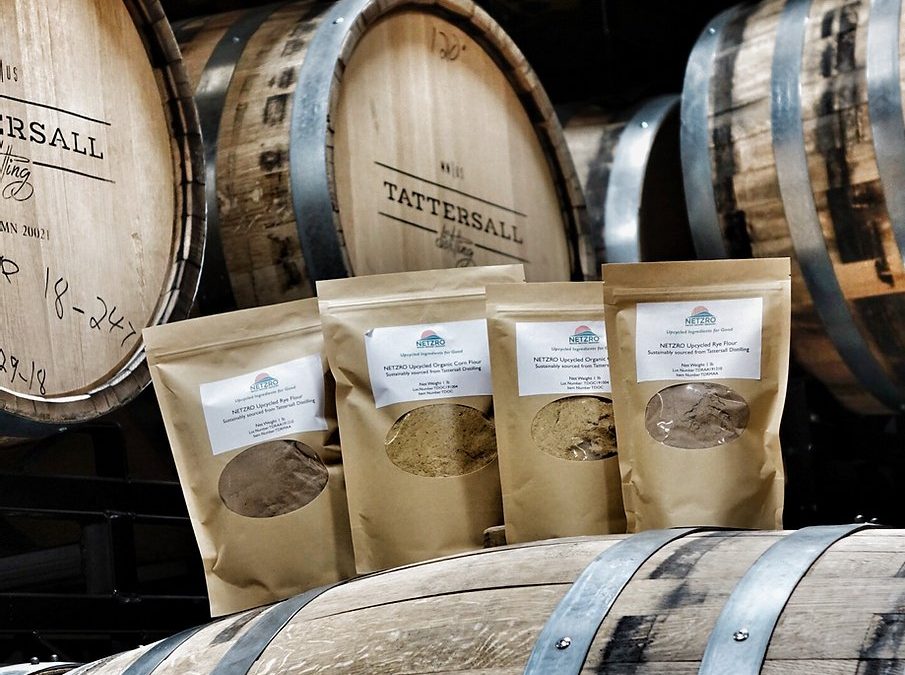 PR / MINNEAPOLIS, MN (August, 2020) – Lift Bridge Brewing Company, Modist Brewing, Dual Citizen Brewing Company and Tattersall Distilling have been brought together by Twin Cities-based food upcycler, NETZRO to form the Twin Cities Spent Grain Co-op. Together, the group announced today the launch of a direct-to-consumer spent grain flour blend, which features rescued and restored byproduct left behind from the brewing and distilling process. The upcycled grain forms a mix of rye and wheat with traces of barley that are blended with locally milled organic whole wheat flour from Baker’s Field Flour & Bread in a 20:80 ratio.

“Lift Bridge Brewing Co has always looked to reduce waste in the brewing process — and spent grain is one of the largest waste streams,” says Dan Schwarz, co-founder and CEO of Lift Bridge Brewing Co. “Normally it goes to local farmers as a supplement for their cattle feed, but working with NETZRO will improve the process by reducing residual water waste and minimizing the transportation of heavy spent grain. Not to mention the resulting flour is incredible. I made pancakes from the spent grain flour and they may be the best I have had.”

NETZRO’s proprietary technology is used to upcycle spent grains. As the sugar is removed during the brewing process, a stronger ratio of protein and fiber to sugar is left behind, making them better for consumers as well as better for the environment. The flour blend can be substituted in the same quantities as traditional flour and imparts a slightly fermented flavor profile reminiscent of sourdough, lending itself to both sweet and savory items.

“NETZRO works hard at making sure products in the food supply chain are not underutilized. At Baker’s Field we mill the brewers spent grain into flour and mix it with our whole grain flour, doing our part to participate in the upcycled food movement,” says Wes Gardner, head miller and baker at Bakersfield Flour & Bread. “To work with local breweries that care about grain as much as we do is a unique opportunity. Combining the spent grain with our flour to create a product that educates eaters about grain is perfectly in line with our values of land stewardship, supporting our community and delighting people with good food.”

Prior to the COVID-19 pandemic, NETZRO was focused on wholesaling upcycled ingredients. Noting the growing demand for flour from at-home bakers spurred the launch of this direct-to-consumer flour blend. Twin Cities Spent Grain Co-op Flour is sold in 24 oz bags for $12.50 and ships nationwide.

In the near future, NETZRO has plans to partner with interested entrepreneurs across the country looking to upcycle spent grains. For more information or to get a brewery involved, email sales@netzro.us.

NETZRO is a food upcycler, that’s created a new process of sustainably converting food that would otherwise be wasted, into safe upcycled ingredients for new food products. Over the past five years, NETZRO has built an ecosystem of farmers, producers, distributors, retailers, restaurants, consumers and regulators, pioneering a circular food economy. Working with large and small-scale businesses across the country, NETZRO uses proprietary technology to turn food byproducts into nutritious, versatile ingredients that are good for the planet, farms, consumers and animals. NETZRO is a women-owned Specified Benefit Corporation based in Minnesota doing its part to reach the UN’s Sustainable Development Goals (SDGs) to end hunger (SDG 2) and ensure sustainable consumption and production patterns (SDG 12). For more information visit www.toogoodtowaste.us

Related: Why Two of the World’s Best Breweries Decided Not to Use Plastic Can Carriers