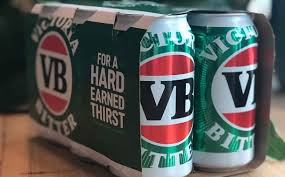 PR / Australia (March, 2019) – CUB’s iconic Abbotsford brewery will no longer use plastic six-pack rings on cans, saving more than 25 million of them from entering the environment each year.

The decision means beer lovers can enjoy our famous beers such as VB and Carlton Draught in a more sustainable way.

The move will see plastic rings replaced by cardboard packaging and marks a major milestone for CUB, one of Australia’s oldest businesses and leading manufacturers.

CUB CEO Peter Filipovic said: “Beer lovers can now enjoy their favourite beers from the can without worrying about their damaging effect on the environment.

“We’ve been around for 180-odd years. We’re determined to be around for another 180 and more, and our sustainability program is critical to that.

“Last year we made a commitment that 100% of our products will be in packaging that is returnable or made from majority-recycled content by 2025. The decision to stop using plastic six-pack rings is a major step towards achieving that.”

While consumers will start seeing the new packaging in coming weeks, it may take a couple of months for old stock to disappear entirely across the country.

The Abbotsford announcement follows the discontinuation of plastic six-pack rings at our Cascade Brewery in Tasmania last year. As part of CUB’s environmental commitments, we will also stop using 137 tonnes of plain shrink wrap each year on slabs of cans in coming weeks. This will also be replaced with new cardboard packaging.

CUB has an ambitious sustainability agenda and last month announced the official opening of the Karadoc Solar Farm outside Mildura, of which we’re the biggest customer.

To read more about our sustainability goals, including our commitment to source 100% of our purchased electricity from renewable sources by 2025, visit CUB.