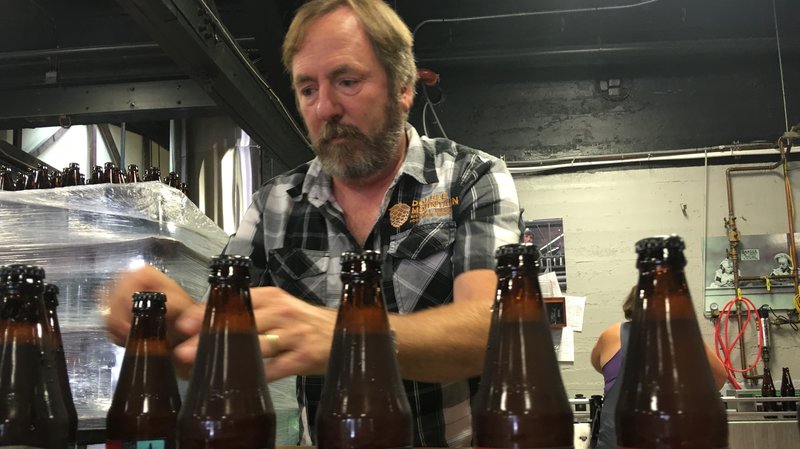 STORY LINK / (September, 2018) — Thousands of thicker, heavier beer bottles are popping up on store shelves across Oregon as part of the first statewide refillable bottle system in the country, and supporters are hoping it might catch on in other states, too.

It’s a triumphant moment for brewery founder Matt Swihart. After six years of being the only brewery in Oregon running a refillable bottle system, Double Mountain finally has company.

“I felt like Don Quixote a little bit, just kind of racing uphill at windmills,” Swihart said. “I was called literally crazy and insane for even attempting it, and fellow brewers were speculating that it wouldn’t work.”

The system he was using was kind of working. He bought refillable bottles from Canada and asked customers to return them. But he was only getting 15 to 20 percent of those bottles back to be cleaned and refilled.

Despite the low return rate, he stuck with it because he knew any bottles that came back would cut carbon emissions. They wouldn’t need to be crushed in the recycling system and reheated into new bottles.

“Anything we get back and clean saves us money down the road, and of course is a more responsible environmental package,” Swihart said. “Frankly it’s just the right thing to do.”

Swihart said what he really needed was a better system of returning the bottles to his brewery.

Now, he has one. It came along with a new bottle developed by the Oregon Beverage Recycling Cooperative, the group that runs the state’s bottle deposit system with support from major beverage distributors.

Read the full story at NPR’s The Salt here.