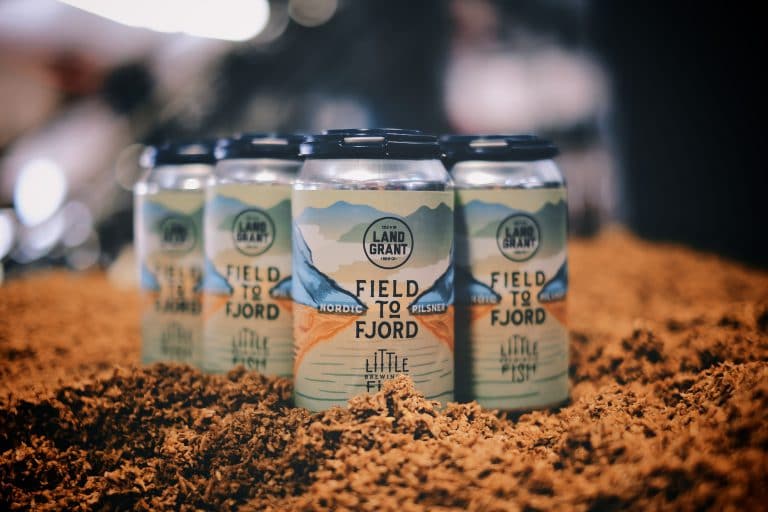 The easy drinking beer—originally planned for a March 2020 brew—was brewed with a focus on locally sourced ingredients. Ohio-grown and malted pilsner and blue corn make for a crackery, earthy base. Michigan crystal hops lend the beer a floral bouquet, and the brew’s namesake quick-fermenting (and energy efficient) Oslo yeast give the beer a light, fruity presence.

“It was great to collaborate in a meaningful way such that each brewer brought some expertise to the table: Little Fish’s experience using malted corn and Land-Grant’s kveik psuedo-lager weirdness. We really enjoyed having them up for the day and sharing some beers, some brewing knowledge, and more than a few laughs,” says Land-Grant Head Brewer, Dan Shaffer. “It’s kind of hard to believe that we started talking about this beer more than a year ago, but it’s great that it’s finally here.”

This release marks the first collaboration between the Columbus-based Land-Grant and the Athens-based Little Fish.

“It was awesome to collaborate with our friends at Land-Grant on a beer that showcases our similar values of brewing as sustainably as possible, and supporting local agriculture,” says Little Fish co-founder Sean White. “Plus, since we don’t can beer at Little Fish, we are extra-stoked to collaborate with a brewery that can package our collaboration beer into six-pack cans. Can’t wait to crush some cans of Field to Fjord with the Land-Grant crew in the near future!”

Land-Grant Brewing Company, an award-winning production craft brewery in Columbus, Ohio, was born from a passion for painstakingly-crafted beer, powerful design, and a mid-western devotion. Land-Grant is defined by their dedication to the craft of producing championship quality craft beer, intention to sustainable brewing, and commitment to the betterment of the Columbus community.

Beer lovers can enjoy Land-Grant craft beer at their Franklinton Taproom and Beer Garden at 424 W. Town Street, or pick up a six-pack at a variety of grocery stores or beer distributors throughout Central Ohio. Connect with Land-Grant on Instagram, Facebook or Twitter. For more information: https://landgrantbrewing.com