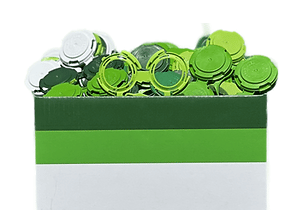 PR / BOSTON, MA (December 2022) – GreenLabs Recycling, a rapidly expanding plastic recycling company serving the brewing and biotech industries in the Greater Boston area has announced their launch of a mail-in program for recycling plastic can carriers from breweries and liquor stores. This mail-in program allows breweries and liquor stores from outside of GreenLabs’ direct-to-facility pickup radius to participate in this New England-based recycling initiative.

The mail-in program will offer breweries and liquor stores outside the Greater Boston area a much needed and convenient recycling solution. These can carriers are made of highly recyclable plastic (HDPE #2 resin) but they often end up in landfills or incinerators due to inefficient sorting technologies at most single-stream recycling facilities. GreenLabs Recycling has been collecting can carriers directly from select breweries and liquor stores near Boston since June 2021, giving more than 2,000 pounds of can carriers a second life.

“We are looking forward to recycling with beer makers and retailers in extended regions,” said Matt Young, a Co-Founder of GreenLabs Recycling. “Given the lightweight and compact size of the can carriers, the launch of a mail-in program makes perfect sense as we are on a mission to give as many of the can carriers a second life as possible.”

According to a Forbes’ article published in April of this year, 95% of consumers said they would participate in recycling and reuse programs if those programs were available in the area. “In Westford [Massachusetts] the community is aware of the fact that the can carriers are not recyclable in single stream programs as curbside recycling auditors often pick them out and leave them on the curb, while taking the rest of the recyclables into the truck” said the owner of the Craft Beer Cellar. “Now our guests have a designated bin for dropping off the can carriers while shopping in our store”.

Participating  in the mail-in program is easy – any brewery or retailer in New England can purchase a recycling box from GreenLabs’ online store at www.GreenLabsRecycling.com, fill the box with can carriers, and mail it back to the GreenLabs Recycling facility in Massachusetts using a pre-paid shipping label via UPS. By working together, these plastic can carriers can be prevented from ending up in landfills or as plastic waste in the environment.

Founded in 2019 with a mission to collect and recycle empty pipette tip boxes, refillable wafers and other plastic items from research facilities in Greater Boston. They have quickly become known for providing locally-based, cost effective plastic recycling solutions to help make science more sustainable. Since 2019, they have diverted more than 100 tons of plastic from labs and are now on their way to do the same for the beer industry.