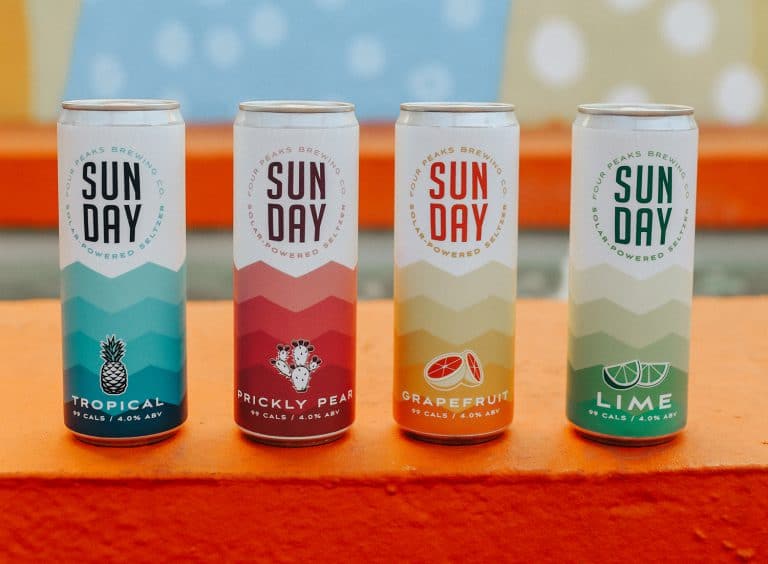 “The Arizona sun kicks our ass so hard every summer, we figured it was time we got a little something back,” says Melissa Osborne, head innovation brewer at Four Peaks.

So last year, the Tempe-based brewery installed more than 500 solar panels on the roof of its 56,000-square-foot Wilson production facility, where a majority of its year-round beers are made.

But solar energy isn’t the only thing that sets Sun Day apart. Unlike most hard seltzers, which are brewed with artificial flavoring, Sun Day’s fruit flavors (Lime, Grapefruit, Tropical, and Prickly Pear) come from real, all-natural fruit juices. The difference can be tasted as well as seen—Sun Day Lime, for instance, has a soft greenish hue, while Sun Day Prickly Pear is bright pink.

Sun Day is 4.0% ABV and 99 calories per can. It will be available in six-packs of the Lime flavor and in mixed 12-packs that contain all four varieties. Packages will be landing in stores throughout Four Peaks’ distribution footprint (which includes Arizona, California, Colorado, Hawaii, Nevada, New Mexico, Texas, and Utah) beginning this week. Fans can check availability near them using Four Peaks’ Beer Finder at fourpeaks.com/finder. They can also follow @sundaysolarseltzer on Instagram for news and info.

Based in Tempe, Arizona, Four Peaks Brewing Co. has defined craft beer in the Southwest since its founding in 1996. Our hometown pride and heritage are at the heart of our pubs in Tempe and Phoenix Sky Harbor International Airport. Our brewers are committed to creating exceptional beers—and have 24 combined medals at the Great American Beer Festival and World Beer Cup to show for it. Anchored by the flagship Kilt Lifter Scottish-style ale, Four Peaks brands are currently available in Arizona, Nevada, New Mexico, Hawaii, Texas, California, Colorado, and Utah. Visit fourpeaks.com for more.

Related: BrewDog Launches Buy One Get One Tree Initiative