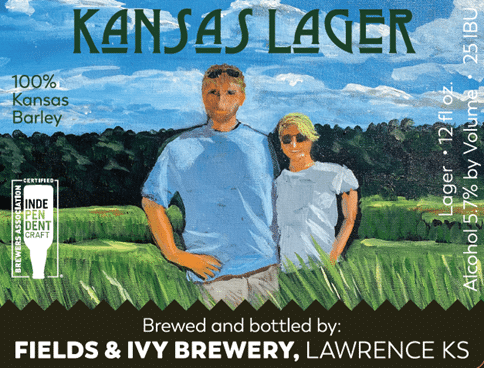 Kansas isn’t typically known for being an early adopter of anything. One historical exception has been the prohibition of alcohol. Kansas banned alcohol in 1881 while the rest of the country went dry 39 years later in January of 1920. Early Kansas breweries and barley growers were basically out of business by 1890. Breweries came back in the late 1980s but barley farming and malting, for beer brewing, has not. It’s believed that a Lager beer brewed with 100% Kansas grown barley malt has not been commercially bottled since 1890 or earlier.

Cory and Veronica Johnston are the founders of Fields & Ivy Brewery as well as a small local grain company called Great Plains Custom Grain. Together with their grain company business partner, Gary Van Horn, the Johnston’s have been growing barley in Kansas since 2016. After five years of learning, they have achieved “malting quality” barley and sent 10,000 lbs of their barley to be contract malted out of state. Malting involves steeping and sprouting the barley kernels then kilning them to the desired color and flavor profile. Small scale craft maltsters are popping up in the wake of the craft brewing and distilling industries.

Dan Chivetta, Fields & Ivy Brewery, Head Brewer, used about 2,200 lbs of Kansas malt to brew 40 barrels (1,240 gallons) of a Vienna style Lager. Chivetta said, “Vienna Lager would have possibly been a style brewed by the last of the pre-prohibition Kansas brewers.” “We are hoping to brew this special beer to celebrate the return of local barley source beers to Kansas and to honor the history of brewing in our region.”