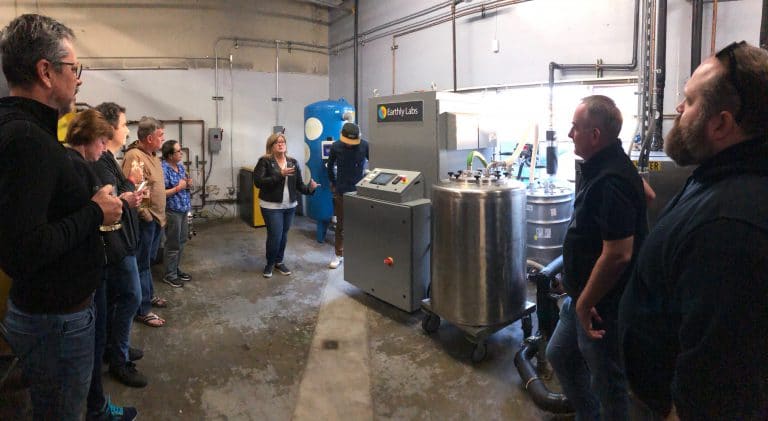 “At Devil’s Canyon, we believe in reducing and reusing resources in all kinds of ways – from solar energy to reusing equipment to repurposing building materials throughout our facility,” said CEO and Founder, Chris Garrett. “Earthly Labs vision fits into our own around practical sustainability. By using CiCi™ to capture and reuse our own CO2, we reduce costs, make better beer, and invest in the sustainability of our planet.”

“Half of all CO2 emissions come from small sources in our businesses, buildings, and homes, representing an untapped opportunity to reduce greenhouse gas emissions,” said Earthly Labs CEO Amy George. “Devil’s Canyon’s Silicon Valley facility is teeming with brilliant minds from Tesla to Google making the impossible, possible. Now their great beer inspires them, too.”

Devil’s Canyon Brewing Company showcased the Earthly Labs carbon capture system at the West Coast Craft Can Invitational held during SF Beer Week on Saturday, February 15. Over 25 breweries from the West Coast and beyond featured their latest tastes of the west, while guests enjoyed free tours of the CiCi® system in action.

Earthly Labs’ mission is to avoid 1 billion metric tons of carbon dioxide emissions. The company’s carbon capture technology allows for energy-efficient capture, purification and reuse of carbon dioxide from small-scale sources like breweries. Earthly Labs is a Public Benefit Corporation committed to using business as a force for good. To find out more, visit www.earthlylabs.com.