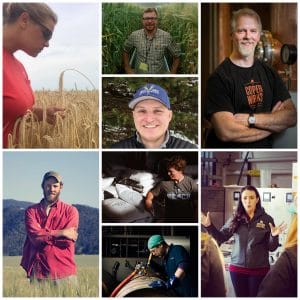 BOZEMAN, Mont. — The Craft Maltsters Guild (CMG) is thrilled to announce the new election of the largest and most diversely talented Board of Directors yet, just in time for the annual gathering of its community at the virtual 2021 Craft Malt Conference.

The CMG Board of Directors is a group of individuals dedicated to holding craft malting to the highest standards, responsible for the general administration of the association’s activities and creating policy on behalf of the Guild. Members of the board of directors are elected by malthouse members of the Guild and will serve a three-year term.

This year, the Craft Maltsters Guild will welcome back three existing members and welcome five new members to the Board of Directors.

Hillary Barile. Returning for a second term, Barile is the Secretary of the Guild and an existing member of the board. Barile is a farmer, maltster, and partner at Rabbit Hill Farm. She brings a big-picture lens to the translation of agriculture to the consumer with her commodity farming background and breadth of leadership experience.

*Curtis Davenport. Prior to co-founding Admiral Maltings, Davenport grew organic fruits, vegetables, barley, and wheat in Santa Barbara County, CA. He began floor malting inside a converted shipping container in 2013 and has been a member of the Craft Maltsters Guild ever since.

*Branch Rothschild. As Brewhouse Manager at Allagash Brewing Co., and long-time member of the Master Brewers Association of America (MBAA), Rothschild’s role in the craft beer community has become increasingly centered around the production of barley.

Hannah Turner. Another returning Board of Director’s seat, Turner is the Director of the Montana State University Barley, Malt, & Brewery Quality Lab that works to improve barley of all kinds and offers barley and malt testing for farmers and craft maltsters.

*Ryan Hamilton. Executive Director of the Michigan Barely Association and a Professional Aide for Malting Barley Outreach atMichigan State University. Hamilton has a rich background and connections in research and academia and brings a valuable perspective on building sustainable barley value chains.

*Jason Parker. Co-Founder and President at Copperworks Distilling Co., Parker is a founding member of the American Single Malt Whiskey Commission with a long history of brewing and distilling.

“We’re excited about the fresh, new perspectives the incoming class of new and returning board members bring to the craft malt community,” says Jesse Bussard, the Executive Director of the CMG. “Their collective experiences and professions span the supply chain from field to glass including not only craft maltsters but two university researchers, a brewer, and a distiller as well.”

Members of the new board will attend and help execute the virtual 2021 Craft Malt Conference February 10 through 12. Registration for this continuing education opportunity closes on Tuesday, February 9.

The Craft Maltsters Guild extends farewell to outgoing board members Twila Soles of Grouse Malt House and Dave Thomas of Dostal Alley Brewery, with gratitude for their service to the craft malt community.

ABOUT THE CRAFT MALTSTERS GUILD