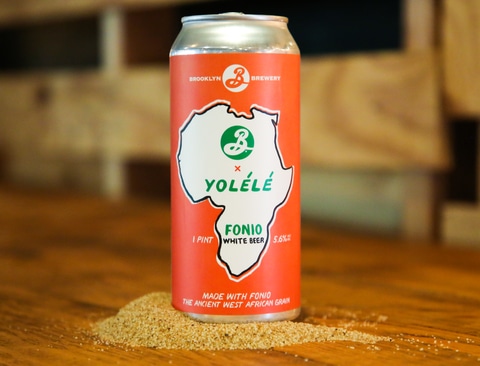 “A few years ago I saw Chef Pierre Thiam’s TED talk about fonio, and immediately said to myself “This grain sounds amazing…I wonder if we can make beer from it?”Tweet this

Yolélé and Brooklyn Brewery share the goal of promoting a more viable future for food and beverage. The beer itself shines golden with the tiny blond grains – which are packed full of nutrients and health benefits – and underscores these companies’ commitment to furthering sustainability through strategic ingredient-sourcing.

Brooklyn Brewery’s James Beard Award-winning Brewmaster, Garrett Oliver, also a world-leading expert on the utilization of both fonio and other sustainability-focused grains in the brewing process, explains, “A few years ago I saw Chef Pierre Thiam’s TED talk about fonio, and immediately said to myself “This grain sounds amazing…I wonder if we can make beer from it?” After all, beer brewing has been an important part of traditional African cultures for thousands of years, and here was one of the grains that was once a staple for people in that part of the world. We did a pilot brew and it was delicious; it was very fruity, almost like gewurztraminer wine. And then when we brought a fonio beer to the Great American Beer Festival in 2019, people went nuts for it. Fast-forward to now – and this is a whole new level of awesome. Not only is the beer really tasty, but growing fonio supports the environment and supports indigenous farms in West Africa. It’s a big win all around.”

Miles Moser, Brooklyn Brewery’s VP of Sales, adds: “We hope that this beer can do several things in the future, beyond tasting delicious. It can serve as an educational opportunity promoting Fonio and other grains grown with sustainability in mind as viable ingredients in food products that can really make a difference in the world. Fonio has a brewing functionality that can be incorporated into both established and avant-garde brewing recipes, and we’re excited to share that with the world.”

Known as the “seed of the universe,” fonio, a grain in the millet family, is a staple crop and source of sustenance. The ancient African grain has thrived in West Africa for over 5,000 years. Fonio flourishes in a hot, dry region near the Sahara Desert, where little else can grow. As a drought-resistant crop, it may hold key lessons about agriculture in the face of climate change. Fonio also has a nutrient rich profile; it is a good source of fiber, iron, B-vitamins, zinc, and magnesium, as well as antioxidant flavonoids, and is particularly high in two amino acids— methionine and cysteine— which promote hair, skin, and nail growth.

Brooklyn Brewery previously featured fonio in their recent collaborative brew with Run The Jewels, a double pilsner dubbed 36” Chain, and in Seed, Stalk And Root, brewed in partnership with Cajun Fire Brewing Co.

Pierre Thiam, the trailblazing Senegalese chef, restaurateur, award-winning cookbook author, and entrepreneur who co-founded Yolélé in 2017 explains, “It’s been my mission to bring the flavors of Africa to America. By utilizing fonio in food and beverage sold in the States, Yolélé supports livelihoods on smallholder farms in West Africa. Working with Garrett and the Brooklyn Brewery team has been an incredible partnership, and I am proud to see this delicious beer with an African flair on the shelves of Whole Foods Market.”

Chris Manca, principal forager for Whole Foods Market, Northeast Region adds, “We are thrilled to support Brooklyn Brewery and Yolélé on the launch of Fonio White Beer. This project aligns with Whole Foods Market’s commitment to elevating local and emerging brands, and shines a spotlight on a wonderful, but underutilized ingredient like fonio. We are excited to bring continued awareness to fonio through the launch of this delicious new brew.”

As for the future use of fonio, Oliver says: “When I started brewing professionally in the late 80s, we really only had a few beer ingredients that we worked with. Today the world of brewing is much more creative, culturally inclusive, and we’re making beers from wonderful ingredients that we’ve re-discovered. Given that fonio requires no irrigation, needs no pesticides, builds the soil, and can help halt desertification, I hope we’re going to see a lot more fonio in beer in the future!”

ABOUT BROOKLYN BREWERY:
Brooklyn Brewery is a leading global independent craft brewer and a pioneer of the American craft beer revolution. From our home in Williamsburg, Brooklyn, we draw inspiration from our local community of innovators and makers to spread the culture and creativity of craft beer to over 30 states and more than 30 countries on 5 continents. Learn more at brooklynbrewery.com.

ABOUT YOLÉLÉ:
Yolélé is a purpose-driven food business that makes African ingredients available to US home cooks and restaurants, while connecting smallholder farms in West Africa with the global food economy. Founded in 2017 by acclaimed chef Pierre Thiam and his business partner Philip Teverow, Yolélé’s signature product is fonio – a resilient and nutritious ancient grain (similar to a rice or couscous) that the company also uses to make foods like chips and pilaf. By sourcing its fonio from small farms in West Africa, Yolélé is able to create economic opportunity for these communities, while also supporting a more resilient, biodiverse food system by helping to revive demand for this ancient, climate-friendly crop. As part of its work, Yolélé is also building a global supply chain for fonio, utilizing a nearly $2 million grant from USAID to create a fonio processing facility in Mali. Later this Fall, Yolélé will launch African-inspired spice rubs, expanding its product offerings outside of fonio for the first time. Yolélé products are available via Amazon and the Yolélé website for direct shipping, and in retail at more than 2,000 stores across the US, including Whole Foods and Target.