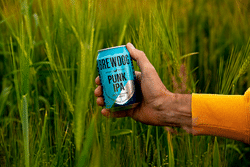 PR / COLUMBUS, OH (September, 2020) — BrewDog, the world’s largest craft brewer, is today launching the final round of its record-breaking crowdfunding program with Equity for Punks Tomorrow. After announcing on August 22 that the craft brewer is now carbon negative, which led to Forbes dubbing BrewDog the “world’s first carbon negative beer business,” BrewDog has now unveiled a unique opportunity for people of the craft beer movement to support its sustainability initiatives. Every single penny of the money raised through Equity for Punks Tomorrow will be committed to cutting-edge sustainability projects including solar power, wind power, electric vehicle fleets, and converting waste into energy. All of these projects will help make BrewDog more sustainable as a business, as it sets out to fight climate change and have a positive impact on the planet.

The launch of Equity for Punks Tomorrow is confirmed to be the last of BrewDog’s equity crowdfunding rounds. Since its initial launch in 2009, Equity for Punks has raised over $97.5 million (£75 million) from 145,000 investors, which has supported investment and expansion across its business globally to a 1,600-strong team, 102 bars and four world-class breweries in Ellon, Aberdeenshire; Columbus, Ohio; Berlin, Germany; and Brisbane, Australia. The U.S. raises in 2017, 2018 and 2019 brought over 15,000 American investors into BrewDog’s global community of craft beer fans, and this campaign has goals of increasing the number of U.S. Equity Punks to 20,000.

Equity for Punks Tomorrow signals the most ambitious series of projects from BrewDog to date, as it embarks on a journey to reduce emissions from its brewing operations to zero in less than 24 months. Smaller-scale projects supporting this goal are already underway through an initial investment from the business, including the BrewDog Forest, a 2,050 acre site in Scotland where the brewer will plant trees as a means to remove carbon from the air. Equity for Punks Tomorrow looks to accelerate the implementation of green infrastructure and technology across BrewDog’s global operations. Specific U.S. projects that will be funded with this round include:

BrewDog cofounder, James Watt commented:
“In 2009, we launched Equity for Punks, and pioneered a new kind of business model. Equity for Punks Tomorrow is the next evolution of this, uniting investors across the globe to make a change today to ensure we have a planet to brew beer on tomorrow. We believe in action not promises, change is not happening fast enough, it’s time to set a new standard for sustainability, and invest in a future we’re proud of.”

Shares in BrewDog USA will be sold online individually at $60 or at investment levels starting today until June 2, 2021. U.S. investors will continue to receive the same benefits of investors from previous rounds, like access to amazing events – including BrewDog’s 8,000-strong Annual General Mayhem shareholders meeting and craft beer/music festival – merch and beer discounts, new bar previews and more.

In August 2020, BrewDog released its first sustainability report, in collaboration with esteemed writer and environmentalist, Professor Mike Berners-Lee. The report details BrewDog’s $39 million plan of green investments across its business and is intended to set a new standard for other businesses to follow suit.

Investors who back the latest round from BrewDog USA will not only see their money support important sustainability projects, but they will also receive unique Equity for Punks Tomorrow benefits that include sustainable supper clubs, vegan food discounts, sustainably-sourced merchandise, and an increased discount on DIY Dog supplies – so shareholders can brew their own beer from home. Plus, each Equity Punk investor will get their own dedicated tree in the BrewDog Forest.

To learn more about BrewDog’s Equity for Punks crowdfunding, read the complete prospectus; or to invest, visit EquityForPunksUSA.com. For more news and information on BrewDog head to @brewdogusa on Instagram, Twitter or Facebook.

About BrewDog:
Since 2007 BrewDog has been on a mission to make other people as passionate about great craft beer as we are. From the Headliner series, which includes bold, uncompromising pack leaders like the flagship Punk IPA, to the Amplified range (beer, but turned up to 11), BrewDog brews beer that blows people’s minds and has kick-started a revolution.

Co-founders James Watt and Martin Dickie shook up the business world in 2010 with the launch of pioneering crowdfunding initiative Equity for Punks, an initiative that has seen the company raise £73m over six rounds, with their latest round open until April 2020.

The funds and the community of Equity Punk shareholders (135,000) has enabled the Scottish craft brewery to scale up without selling out. With over 102 bars across the globe, export into 60 countries, and a brewery in Ohio that launched in 2017, BrewDog continues to take the craft beer revolution stratospheric, whilst continuing to push the boundaries, invest in people, put the beer first, and champion other small breweries in its venues.