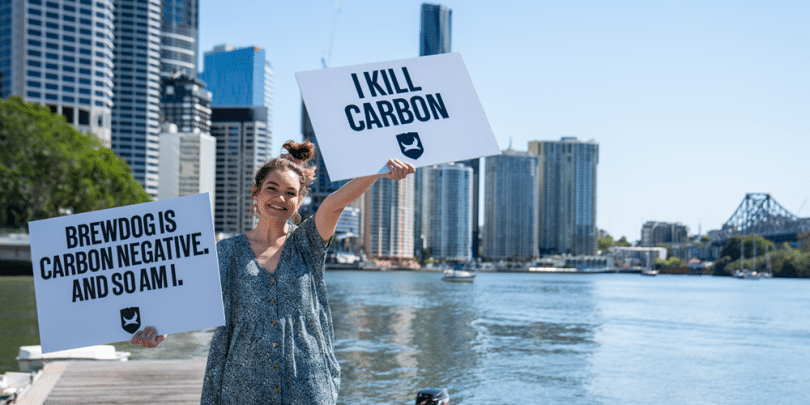 PR / Scotland (October, 2020) – Scottish craft brewer BrewDog has today announced it is the first employer in the world to ensure that all team members will now be carbon negative, just like the business itself. The move comes as BrewDog announced last month that it has taken the unprecedented step to become carbon negative and that it will remove twice as much carbon from the air than it emits every single year, making it the first carbon negative international beer brand in the world.

BrewDog has introduced a planet saving employee perk where all staff around the world, including those at Brisbane’s brewery and taproom, will be required to calculate their personal carbon footprint via the Pawprint platform which enables them to understand their personal impact on the planet. The trailblazing brewer has also committed to offsetting the carbon ‘pawprints’ of its employees’ dogs to help staff understand that everything has a carbon footprint and impact on the environment.

BrewDog will then calculate its entire team’s footprint and double offset this through gold standard carbon offset programmes that remove twice as much carbon from the air each year than what the team is responsible for, as approved by its carbon foot-printing expert and lead scientific advisor, Professor Mike Berners-Lee.

Last month, BrewDog unveiled a groundbreaking climate action program with AUD $55m (£30m) of green investments across its business. Locally, this will see BrewDog Australia add solar panels to supply a significant amount of the energy demand from the brewery, taproom and restaurant and provide all spent grain to feed local cattle in Queensland. Excess CO2 emissions are offset through Carbon Neutral’s Yarra Yarra Biodiversity Corridor, a multi-species native reforestation project located in Southwest Australia which is a global biodiversity hotspot.

James Watt, co-founder of BrewDog, said: “We are proud to be the world’s first carbon negative beer business and one of the very first businesses to offset the carbon footprint of all of its employees (and their dogs). Our commitment to sustainability is an integral part of our business across our entire operation, and means BrewDog both as a company and as individuals are having a massively positive impact on the planet and helping drive the change that our world so badly needs.”

For more information on BrewDog’s Carbon Negative status and how they offset carbon emissions, download their sustainability report here.